Teen Mom OG Maci Bookout star surprised everyone with her Valentine’s Day Announcement that she is currently pregnant with her third child, her second with her fiance Taylor McKinney. Maci made the initial announcement on Instagram, and later MTV shared a video of Maci talking about baby number three, which could come soon enough to mean she and Taylor will have two children under one year old!

Here is the video:

“I found out I was pregnant with baby number three right after we were engaged,” Maci reveals. “It was not planned or a pregnancy planned at all,” she adds.

Maci later reveals that she and Taylor had very different reactions to the “surprise” when they found out. “When Taylor found out we were expecting he was very excited, annoying,” Maci says. Taylor quickly intervenes: “I was definitely the most positive. She had a little depression. “

Maci goes on to reveal that all of their male friends seemed to react the same as Taylor did, while all of their female friends aligned with Maci. “When people found out,” Maci says, “I think all women were logical and – I mean, realistic. And all the men were happy.

Taylor used slightly different terms in his account of the reactions. “All the women were pessimists, all the men were optimists. Men are excited about it. Maci laughed and replied, “Yes, because you have no idea.” Taylor rolled his eyes. “Oh please!” 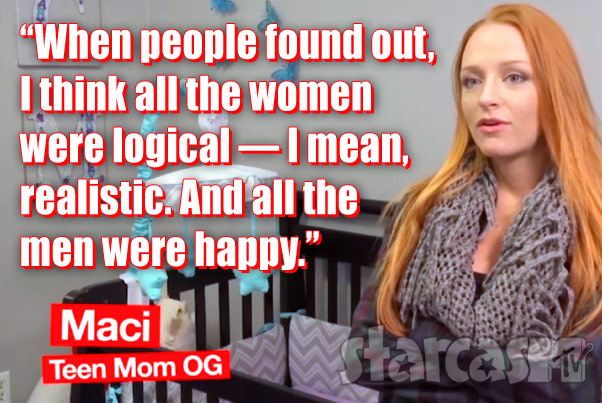 So what is the Maci Bookout due date? “I have to give birth on May 30,” she said, “so we’ll probably have two children under a year old. They will be Irish twins.

Maci says being a pregnancy veteran has definitely changed her attitude about the process. “Because it’s the third one, you know what’s going on. You’ve been there, you’ve done it a few times now, so, I don’t know, it’s just laid back.

Congratulations again to Maci and Taylor! To see the full pregnancy reveal (I’m guessing), be sure to log into Teen Mom OG airs Monday nights at 10 / 9c on MTV.